Today I want to comment on an e-mail that was sent by the IT department of a technology company. To give you some context, the official operating system used by the company was Windows 7. However, due to some development needs, some Software Engineers and IT folks were using Windows 8. It wasn't an officially supported OS, but a reasonable amount of people were using it and honestly no problems or incompatibilities were found. Anyway, I copy pasted the e-mail so you can read it and take some conclusions of our own. Some of the content was change to keep it anonymous, but the general idea remains the same. Here it is:

ALL operating system installations/upgrades are to be managed by IT. You have been allowed certain privileges on your company provided machines so that you productivity isn’t stifled, but NO employee should take it upon themselves to upgrade the OS of their laptops or any of the virtual machines they have access to. As the IT department is ultimately responsible for managing these devices, and not the employees, IT is also responsible for the management of the operating systems. Clearly, running the updates for the devices is OK, but never… never… should an employee take it upon themselves to upgrade the operating systems of any company provided machine.

Team Leads please make sure that your employees are adhering to all corporate policies… including this one.

If you have any questions, comments, or concerns regarding this email please reach out to me and we can discuss this further."

Now let me give you the full version of the story. The entire company got this e-mail after one of the Software Engineers purposely installed Windows 8 on his machine and requested some assistance from IT to join the company’s domain group. Keep in mind that this is a simple operation and the company's domain rules were quite loose, the only real requirement was running McAfee Anti-Virus software, which was not a problem. Anyway, the reason why the Engineer needed Windows 8 on his machine was simply because he needed some virtualization Software compatible with Windows Azure, so he could create a custom Virtual Machine image and then upload it to Azure. That way he could easily spin-up new instances of that Virtual Machine image in Azure. You might not know this, but Windows 8 Professional version comes with Hyper-V virtualization software which is free and compatible with Azure. To make matters a little bit more annoying, in the development group some of the Engineers were already running Windows 8. Some of them installed it on their own, others actually got some help from the IT department. However on that particular Friday morning the Chief of IT probably had a bad night and came up with this new mandate and rapidly wrote the e-mail I posted above… The way I see it, if there was an additional cost (which was not the case since all the developers had active MSDN subscriptions) and there was some security concern (which there wasn't since Windows 8 is far more secure than Windows 7) or if this was experimenting with unreleased/unsupported software, I would totally understand his email. However the developer had a specific need to use Windows 8, but now, because of the bad mood of their IT leader, he wouldn't be able to use the tools he wanted to solve his problem. On top of all this, the developer was called irresponsible, irrational and disrespectful to the IT, when he actually had a valid reason to make the upgrade and when others before him already have done the same. But the worst part was that IT instead of providing support and assist the developer's needs, they fought it and made an unfunded decision, that caused a significant impact on the developer's productivity.

What upset me the most about this episode, was the outcome. The company's leadership stood behind IT's decision and enforced the idea by saying it would reduce costs and maintainability. A decision that I saw as a excuse to IT's laziness and that impacted the developer's productivity, was accepted by the leaders. Now, instead of being just the IT folks dragging down developer's productivity, management's came to drag us even more. This is something what seriously didn't understood. I always thought of IT was a task force created to aid everybody's needs and to improve the company's productiveness, not to fight. 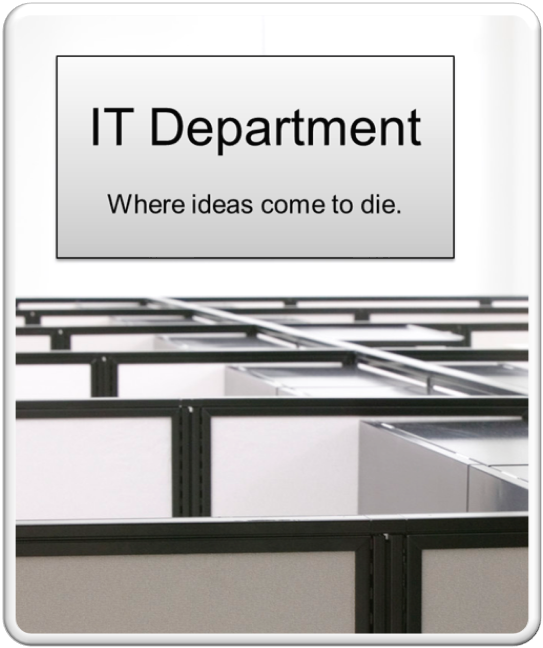